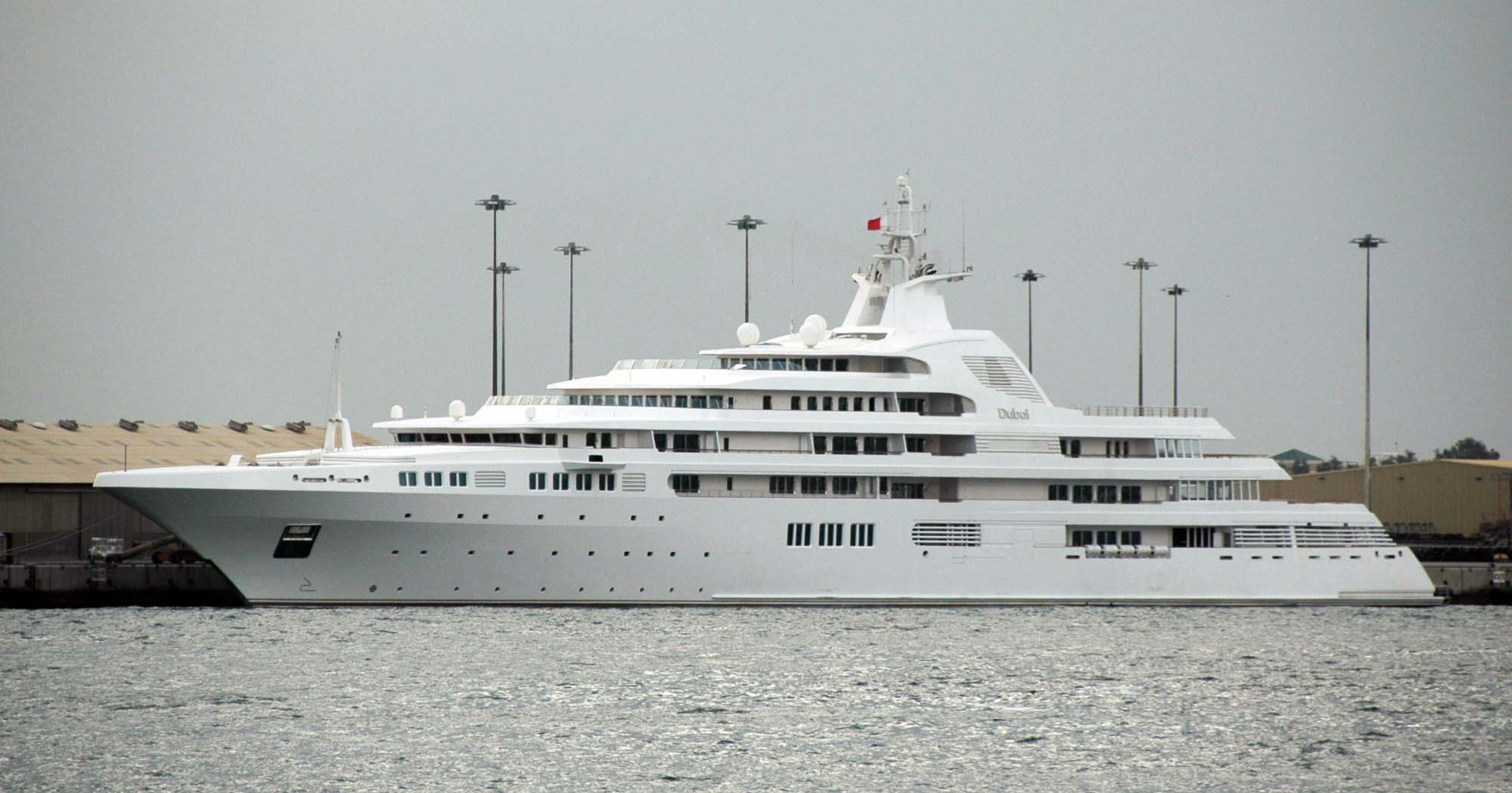 The most expensive yacht in the world is History Supreme which has many luxury features. The yacht is a large floating ship, and the concept of it began in the 30th century when wealthy people were commissioned to build large private yachts for their pleasure and enjoyment. The owing personal ship is a synonym for unrivaled wealth. But this floating extravagant can only afford the billionaires. The popularity of these yachts increased in 1997-2008 and the earliest luxury yachts include Savarona and Christina O. It looks like large vessel with bedrooms, bathrooms, swimming pools, dining area, etc. Many yachts incorporate luxurious features which enhanced the sophistication and beauty of these yachts. We make a list of the 10 most expensive yachts of the richest people in the world. These are luxurious and most comfortable.

Lady Moura is Built-in in 1990. This luxury yacht was designed for Naseer Al-Rashid who is a Saudi Arabian businessman. You can easily recognize this luxury yacht from its name written prominently with 24 karat gold. It looks like a pool on a 344-foot board with a retractable roof, a 75-foot Viscount Linley dining room, and a helicopter. A unique feature is a hydraulic platform covered with sand, and it slides from one side of the yacht to sit right at the waterline. It accommodates almost 30 guests and carries 60 crew members. The yacht has sand and deck chairs, palm trees, a Mangusta 80, an S76B helicopter, and 48 – a feet Sant Juan boat.

Al Mirqab is one of the world’s largest and world second most beautifully designed yachts in the world. It was built for Qatar Prime Minister Hamad bin Jassim bin Jaber Al Thani by German Peters Schiffbau Wewelsfleth in 2008. This luxury yacht has ten suites with bathrooms, a living room, and a bedroom and comfortably accommodate 24 guests. The owner of the yacht has two VIP rooms for himself and 55 rooms for the crew members. For guests, this superyacht includes a sun deck, pool, helipad, onboard cinema, jacuzzi, outside bars, and water sports equipment.

Russian Oligarch Alisher Usmanov, Lurssen Yachts built this in 2008 and named it the name of his mother. It is the world’s largest yacht with a length of 360.89 feet. Dilbar is used for the visit of private islands by its owner. Its luxury features include the helipad, and swimming pool, and have enough space for 20 guests and 48 crew members.

Another luxury yacht by Lurssen Yachts is Al Said, and it was given the name after the name of Sultan of Orman, Qaboos Bin Said Al Said. It looks like a concert hall for 50 – a piece orchestra. When it was completed in 2008, it claimed that it is the second-largest yacht in the world. Al Said can accommodate 70 guests and 154 crew.

Superyacht A is 400 feet long yacht boasting and original design of a stealth warship or submarine. It was developed by Blohm + Voss of Hamburg and named on the initials owners of Russian billionaire and his wife Andrey and Aleksandra MelniChenko. It is entirely an epitome of luxuries and extends over 24,000 square feet housing a 25,00 sq ft bedroom and disco. Superyacht A has six guest suites that can accommodate 14 guests.

These guest suites were also converted into four large staterooms due to moving walls. French crystal is used in making tableware and glassware and mirrored surfaces are added throughout the interior. It has three swimming pools, a helicopter hanger, and a 30-foot speed boat in the hull on deck. One swimming pool is glass-bottomed and located above the disco.

This luxury yacht was built jointly by Lurssen Yachts and Blohm+Voss. Prince Jefri Bolkiah of Brunei commissioned this yacht for ten years, and it launched in 2006. The interior of the yacht was designed by Platinum Yachts who acquired this for a ruler of Dubai Sheikh Mohammed Rashid al-Maktoum. Handmade mosaics and circular staircases with glass steps \ are designed interiorly; these glass steps change color with light when light enters from the top deck. The most prominent features of the yacht were several jacuzzis, many sunbathing areas, and a swimming pool with handmade tiling.

Many VIP and luxury guest suites are available, and space for more than 115 crew members is made. This extravagant yacht has a helipad that accommodates a helicopter of up to 9.5 tons. Formerly it was the largest yacht in the world.

Behind this luxury yacht is Lurssen Yachts which purchased this yacht from Sheikh Khalifa bin Zayed al-Nayan for $650 million. It is the world’s most complex and challenging yacht and secured 4th position in the list of luxury yachts. Azzam is not prominent only due to their price tag but also its size; it is almost 590 feet long. This impressive yacht has the fastest speed of 35 mph. French interior decorator Christophe Leoni designed Azzam interiorly and described it as luxurious and sophisticated in a turn-of-the-century Empire style. It is the world largest private yacht in the world and knocking the Eclipse belongs to Russian billionaire Roman Abramovich off the top sport.

These luxury yacht compromises are floating a replica of the city of Monaco. The Streets of Monaco is modeled on a section of Monte Carlo. The reason for getting a high price tag is its fantastic features by Yacht Island design of Derbyshire country in England, Which has scaled-down reproductions of landmarks from Monaco billionaire playground. It has featured with popular Hotel de Pairs, La Rascasse, Cafe de Paris, Loews Hotel, and Monte Carlo Casino.

Street of Monaco has seven guest suites with bathrooms, receptions room, dressing rooms, and balconies in the Atrium which is the ship’s centerpiece. Other luxuries of the yacht include a racetrack, swimming pools, and a tennis court. The atrium is the central apartment of the owner of the yacht extends over 4,800 square feet and has three floors. Many other brilliant features of Streets of Monaco are the mini waterfall, BBQ, and cafe bar boasting underwater views, submarines, and helicopters.

Eclipse is the second largest yacht in the world and many rumors about its worth from $800,000 to $1.5 billion. The owner of the Eclipse is Roman Abramovich, and it was built by Blohm and Voss of Hamburg. It is an almost 536 feet long luxury yacht. Its immense size has the most amazing features like two swimming pools, 24 guest cabins, a disco hall, many hot tubs, two helicopter pads, three launch boats, and a mini-submarine that submerges up to 50 meters underwater.

For the security of the yacht intruder detection system and missile defense system are fitted. The bridge of the yacht and master bedroom is also equipped with armor plating and bulletproof windows. You can say it is an Amazing yacht that boasts an anti-paparazzi shield with laser sweeping and surrounding areas. 70 crew members maintain this ship. Light is thrown on the camera to prevent the photograph from being taken.

History Supreme is the world’s most expensive yacht in the world and also includes the world’s most expensive things list. It is designed by UK designer Stuart Hughes and took three years to complete. Now it was owned by a Malaysian businessman for $4.5 billion. It is a fantastic yacht entirely merged in solid gold and platinum. The assembly of yacht is made of these precious metals and has a weight of 100,000kg. Everything is coated with gold from the base of the vessel to the deck, rails, dining area, and staircase.

The Master bedroom of this superyacht is most amazing, and it features meteorite rock and a statue made from good Tyrannosaurus Rex bones. Simply it is a masterpiece, and everyone admires its beauty. A 68 kg 24 karat gold Aquavista Panoramic Wall Aquarium enhanced the grace of the master suite. A liquor bottle with an 18.5 karat diamond which has worth $45 million featured on the board. Other extravagant features which make it unique among all yachts are an iPhone wrapped in 500 cut diamonds with two interchangeable diamonds on the home button, a rare eight-karat diamond, and a 7.4-carat pink diamond included.

List of 10 Most Expensive Yachts in the World – Luxurious Yachts

What we conclude from this article is that a Yacht is a luxury thing in this world and a status symbol. It is owned by billionaires. However, people can enjoy these luxury yachts travel. Owing to their private boat gives an immense pleasure. If you have enough money then you can spend it in right place by purchasing a private yacht.

10 Most Valuable Coins in the World History

Top 10 Most Expensive Hollywood Movies of All Time